Crypto adoption is outdated, it’s bringing world peace now. Dennis Rodman the “mutual friend” of Kim Jong-un and Donald Trump started crying while sharing his sentiments on the meeting that has been apparently made possible by him. And Rodman gives the credit to PotCoin (POT) that helped in making it a reality which worked out real good for POT as it took a hike of over 20 percent in the slow market.

The credit goes to Dennis Rodman and PotCoin (POT)

Finally, cryptocurrency has realized its value!

Well, the media and governments all over the world have their eyes fixated on the Trump-Kim meeting in Singapore but there’s even more interesting thing happening in parallel to this historic meeting.

The eclectic sideshow provided by is Dennis Rodman, the former basketball star and all thanks to the crypto market. How? You Say!

Well, the mutual friend of Kim Jong-un and Donald Trump, Rodman made an appearance on the TV in what was a bizarre show that has him in tears.

A highly emotional Rodman, stated in his rambling interview to CNN that he knew it was going to happen, “I said to everybody, the door will open.”

What was interesting was, apart from wearing a “Make America Great Again” baseball cap, Rodman was wearing a T-shirt with the name PotCoin, his sponsor. He even shared a Tweet thanking the Potcoin for supporting his mission.

Just arrived to Singapore for the Historical Summit! Looking forward to @POTUS having incredible success that the whole world will benefit by. Thank you @potcoin for supporting my mission! #Peace #Love #HistoricalSummit #Singapore #PresidentTrump #MarshallKimJongUn pic.twitter.com/XNDsyBjLv8

If you don’t know about PotCoin, its is marijuana-related cryptocurrency that surely knows how to play the marketing gimmicks.

Apparently, PotCoin is what has made the Kim and Trump’s meeting possible as accounted by Rodman by the Guardian, the incident that led to this meeting.

It all started when Rodman made good on his promise to have ex-NMB players in North Korea in 2014,

“I gave him something for his birthday … I said: I’m going to bring a professional basketball team to you. He said: Can you do that. I said: Yes I can. Even though I couldn’t do it, I knew if I fail now there is going to be a problem.”

“But I got Potcoin here helped me out, my sponsor, fetch those guys and it happened. And Kim Jong-un came to me and said: ‘Dennis – you know what this is the first time someone has ever kept their word to me and my country’.”

Rodman has visited North Korea multiple times and met Kim about thrice since 2013. Late on Monday, he arrived at Changi airport.

To share a few views of the people on Twitter, Ralf tweeted, “Kardashian, Rodman … what’s next, Roseanne running a NASA mission to Mars?”

“Watched your i-view on @CNN, you have an underestimated understanding for KJU. Sadly, the U.S. media is steadfast in taking down 45 and looks at anyone who supports him as a threat.  Keep doing what you’re doing and keep the compassion for peace.”

“News reporters can act all they want. But @dennisrodman single handedly may have done more for the world than any player in US history. Trump of course gets credit for this meeting. As does Dennis Rodman for being one of the first Americans NK trusted. And his sponsor @PotCoin.”

The fate of the meeting will take time to decide, however, this publicity stunt has PotCoin cryptocurrency get pumped despite a slow market. 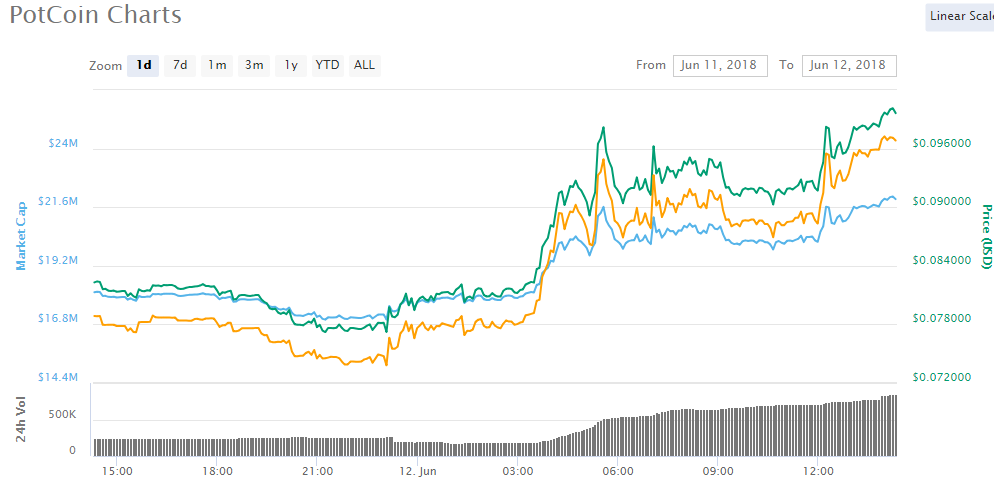 Apart from the summit, this just might help other cryptocurrencies as well giving them a marketing boost.

What are your views on PotCoin? Share your thoughts with us!

✓ Share:
Disclaimer
The presented content may include the personal opinion of the author and is subject to market condition. Do your market research before investing in cryptocurrencies. The author or the publication does not hold any responsibility for your personal financial loss.
About Author
Sahitya Kumar
Sahitya is a crypto enthusiast. He is a specialist on management and strategic planning for over 5 years.
Facebook

Guaranty Escrow to Accept Dogecoin Payment For Real Estate Purchases
Guaranty Escrow, a real estate service provider that accepts crypto…
Sahitya Kumar 10 Articles
Sahitya is a crypto enthusiast. He is a specialist on management and strategic planning for over 5 years.
Follow Sahitya @
Facebook